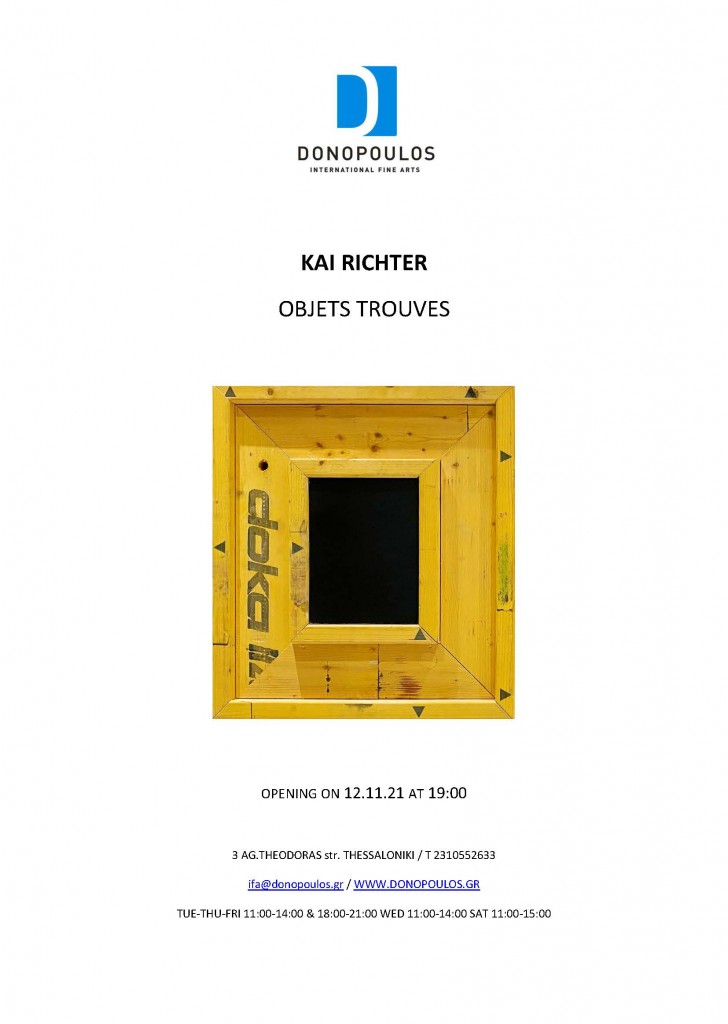 Kai Richter. Objets trouvés
November 12 – December 12, 2021
Donopoulos International Fine Arts is pleased to announce the second solo exhibition dedicated to the internationally acclaimed German sculptor Kai Richter (b. 1969 in Munich, lives and works in Düsseldorf). Known for many years especially for his use of new and used construction materials— including sheetrock, scaffolding bars and boards, wooden formwork beams, concrete, etc.— in recent years, Richter has expanded his store of materials to include found sheet metal and signs, elements from overseas shipping containers and wooden crates, antique bricks and cannon balls, metal shelving and vent covers, etc. In doing so, he not only updates the concept of the ready-made formulated by Marcel Duchamp more than one hundred years ago, but also and especially expands this to include the aspect of time. Richter’s recent works are thus not comprised of new, pristine goods purchased at wholesale specialist stores, such as Duchamp’s (in)famous Fountain from 1917, but rather objets trouvés that show signs of wear and weathering.
The French term objet trouvé was coined in the early twentieth century to describe works of art comprised of found objects from everyday life, which are discovered by the artist and raised to the level of high art through manipulation, combination, and a shift of context. Pablo Picasso’s Bull’s Head from 1942, comprised of a bicycle seat and handlebar, is a prime example. In contrast to Duchamp with his playful Dadaist irony and Picasso with his penchant for figurative narration, Kai Richter is a convinced formalist—entirely in the spirit of “What you see is what you get.” His objets trouvés are neither metaphorical provocations nor do they tell any stories. In many cases, they offer visual and/or conceptual associations to revered pioneers of formalist art, such as Carl Andre, Richard Serra, Barnett Newman, and Frank Stella. Most importantly, however, they bear witness to the German artist’s fascination with the aspect of time. This has, of course, always been the case with Richter who, with his continued use of construction materials, for example, refers not to the completed architecture as such but rather to the processes of building and dismantling, which take place over extended periods of time. Not being, but rather becoming. The same holds true of his more recent objets trouvés. The rust, scratches, dents, splatters of paint, or peelings on the surfaces of the panels of found sheet metal, for example, are evidence of the life lived by the object before it became transferred to the realm of art. In a certain sense, they have already been ‘painted’ by the passage of time.
It is not what they were before that interests the artist, but rather what they have become in the meantime: pictures and objects with fascinating formal features that recall but do fully without a “composition” conceived and implemented by the artist. The traditional role of the artist as creator is thus also challenged and shifted to that of the discoverer. In this sense, the artist no longer produces, but rather sees and selects. In doing so, Richter suspends the traditional dichotomy of high and low, fine art and handicraft; the question as to what is worthy of the designation “art” is declared moot. If “what you see is what you get,” with Kai Richter, one gets quite a lot…
Gerard Goodrow